Following a meeting Michael Fabricant had with HS2 officials on Tuesday 21st June, a reduction in the period of closure to the footpath between Streethay and the adjacent canal towpath has been achieved from up to 6 years to possibly just one. The problem was brought to the attention of Michael by his constituent Phil Thornett and by others.  See HERE.

David Speight, Project Client Director of BBV and HS2, has now written to Michael Fabricant and said:   “I recognise that the closure of the public right of way will be disruptive to Mr Thornett as well as the wider community and I want to reassure you that we take our responsibility to impacted communities very seriously and do try and minimise disruption wherever possible.

“Due to the extent of our local works, we are not yet able to offer a diversion route for Fradley and Streethay 6 at this time. However, subject to concluding arrangements with local landowners, we hope to be able to open a diversion in late 2023 which will allow safe access to the canal towpath.

“This means that even though the Environmental Statement allows for a six year closure of the footpath, which as you will be aware we had previously reduced to four years to reduce disruption, we now hope it will remain closed for just 18 months. We are in the process of concluding our discussions on this and once we have confirmation, we will write to you again with the final details which I hope will be helpful to you and those impacted by the closure.

“Unfortunately, it has not been possible to find a way to keep this right of way open during this phase of construction to protect the health and safety of the public and our workforce. The existing footpath crosses what will become the Streethay cutting which is a large and deep excavation to take the HS2 track below the line of sight, reducing the visual impact of HS2 within the area. To create the cutting we need to excavate over 750,000 cubic metres of earth which will require a large amount of vehicle movements and involve heavy machinery. To ensure that this work could be conducted as safely as possible the decision was taken to close the right of way.” 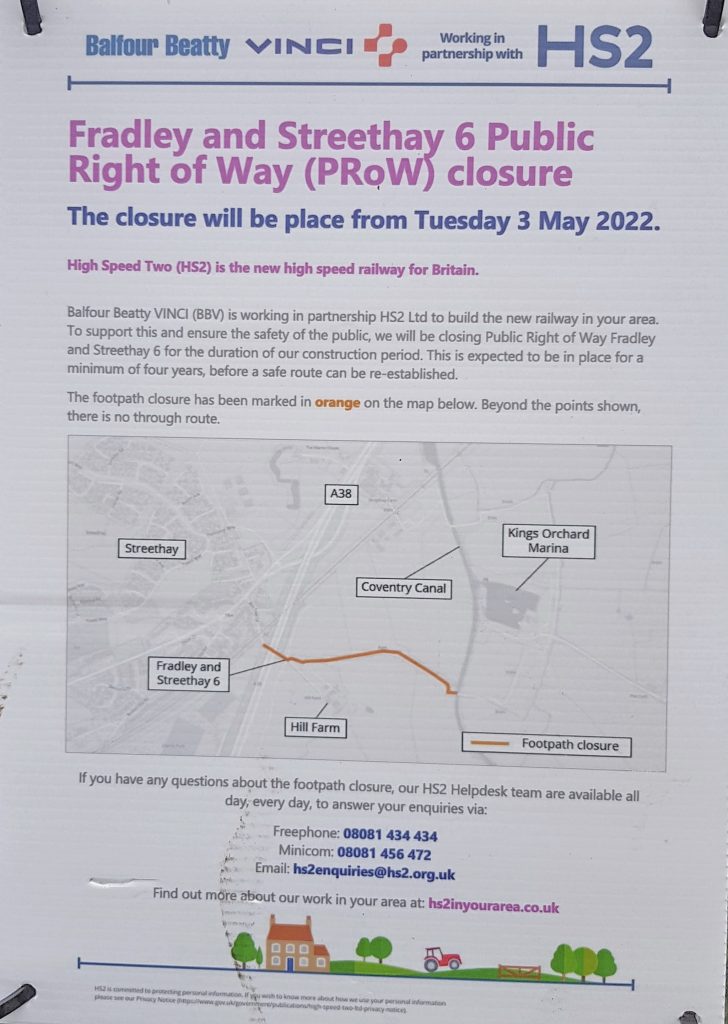 Michael Fabricant says “I do understand how disappointing this response is, but given that the original plan was to close the footpath for ‘a minimum of four years’, 18 months will be an improvement. (See attached notice). In fact, I hope that in practice it can be reopened within 12 months.  I intend to walk the diverted route with Phil Thornett and see for myself how dangerous crossing the A38 can be.  Unfortunately, the construction of a temporary footbridge was not considered to be practical.

“Meanwhile, eventual closure of the southbound slip road into Streethay will cause further disruption and I hope that this too can be kept to a minimum amount of time.  The only good news is that I was assured at the meeting that the A38 itself will not be closed while a culvert or ‘tunnel’ is constructed underneath it while deep cuttings are dug either side.

“Those with long memories will recall that the original plan was for HS2 to run on stilts further west slicing off a part of the Boley Park housing estate in Lichfield.  When I managed to get the line moved to its present position, HS2 wanted the line to run high over the A38 with track being visible for miles around and we also managed to get that changed.  While going under the A38 will cause much more initial engineering work, it will mean that the train will now run in deep cuttings reducing both visual and sound pollution nearby.”