The closure of a public right of way by HS2 is forcing walkers to cross the dangerous A38 trunk road.

Phil Thornett, a constituent living in Streethay near Lichfield, has written to HS2 and Michael Fabricant.

Phil asks:  “The Fradley and Streethay Public Right of Way has been closed in support of the HS2 construction works for the next four years.

“The closure of this right of way severely impacts the safe access to the Coventry Canal countryside and the local public house for the residents of Streethay.

“The HS2 employees at the site were sympathetic, but when I enquired as to an alternative right of way or deviation, they directed my friend and I to an uncontrolled, poorly maintained and frankly dangerous foot crossing of the A38; one of the busiest roads in the local area.

“A friend and I attempted the crossing as directed, but we were trapped for 15 minutes in the central reservation awaiting a small gap in traffic that we could dash through.  It is incredibly unsafe, adds 2km to the journey and certainly does not serve as a fit diversion for the original.

“Is there a safer alternative, or a number of phased alternatives that could enable both the continuation of the construction activities as well as the access for local residents to the Coventry Canal path?  Could any element of the site footprint be phased differently so as to reduce the duration of the closure?” 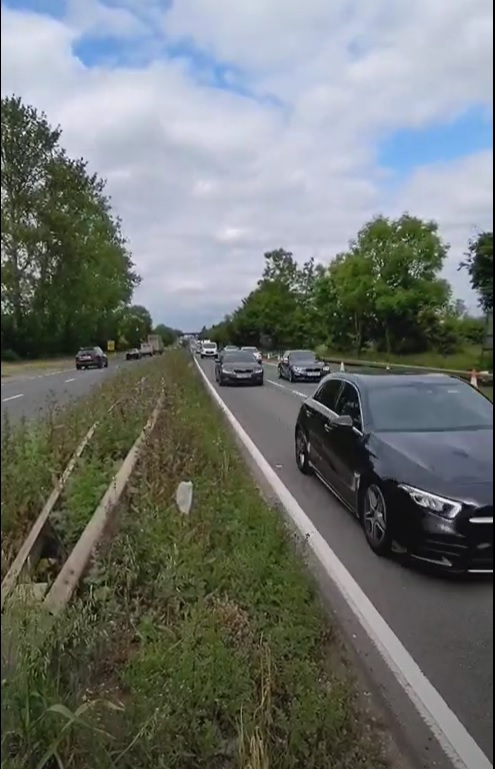 Michael says “I have taken this up with HS2, as has Phil, asking whether a more suitable route can be devised and I have proposed a temporary footbridge constructed to avoid the need for pedestrians having to cross the busy 4 lane A38.  Phil is fit and well and able to dash across the A38 – others may not be able to do this so easily.  In any event, it’s a highly dangerous manoeuvre for anyone with cars speeding along the dual carriageway.

“HS2 have a duty of care and providing a route which is poorly maintained and dangerous is not the answer and is wholly irresponsible.  They cannot ask people to take their lives into their hands.  This does not augur well for other work in the area.”