Burton’s Member of Parliament, Kate Griffiths, has brought together Lichfield MP, Michael Fabricant, and South Derbyshire MP, Heather Wheeler, to call for improvements to the A38 as part of Road Safety Week (15th – 21st November).  The A38 passes through each of their constituencies, and is of critical importance to their residents, connecting East Staffordshire with the rest of the Midlands and the south of the country.

Commenting, Kate Griffiths MP for Burton, says:   “The A38 is used daily by my constituents and is a vital corridor for many local businesses.

“Sadly, we continue to see incidents too often on the road which result in significant delays and Burton becoming gridlocked.

“I know that this is an issue that Michael and Heather see in their areas too, and so I am grateful to them for their support for my campaign.

“The funding from Midlands Connect is welcome, but it does not automatically mean the funding for delivering the improvements will be granted.

“Working with my neighbouring MPs, we stand a greater chance of securing the best possible improvements to this section of A38, as well as other local sections which also need investment.”

Lichfield MP, Michael Fabricant, adds:   “The A38 is the gateway to Staffordshire, and to all that our county has to offer. However, for many, first impressions can be of traffic and long waiting times.

“This cannot be right, and I want to thank Kate for bringing us all together, determined that we will make the case for new investment into the A38 which will deliver a positive impact for our region and all road users.

“In particular, truck access from Fradley – a national distribution hub – onto the A38 is both slow and dangerous. And this is also why Kate supports me in the reopening of the Lichfield to Burton rail line to passenger traffic which in years to come will help cut back some of the congestion on the A38.”

South Derbyshire MP, Heather Wheeler, says: “Little time passes between reports of issues on the A38.  It is a frequent occurrence, and one which is a nuisance to my constituents just over the county border.

“Getting between work, family and home is made a constant nightmare with everyone having to allow extra time to their journey.

“Kate, Michael and I want to see more improvements to this road, and will work together make the case and to ensure journey times are cut.”

Kate Griffiths adds:  “Speeding on this road has been a perennial issue, and a number of slip roads are small and hazardous to traffic exiting and entering the dual carriageway. This often results in congestion with long tailbacks and waiting times for commuters and other road users.

“The build-up of traffic on the A38 has a knock-on effect to the roads running through Burton and other neighbouring towns, with transient traffic forced to use alternative routes through residential areas.

“The neighbouring MPs have come together to seek new investment from the Government and Highways England to improve local junctions and slip roads to the A38 to make it safer for all road users, with the goal that this will ultimately cut congestion and improve journey times.” 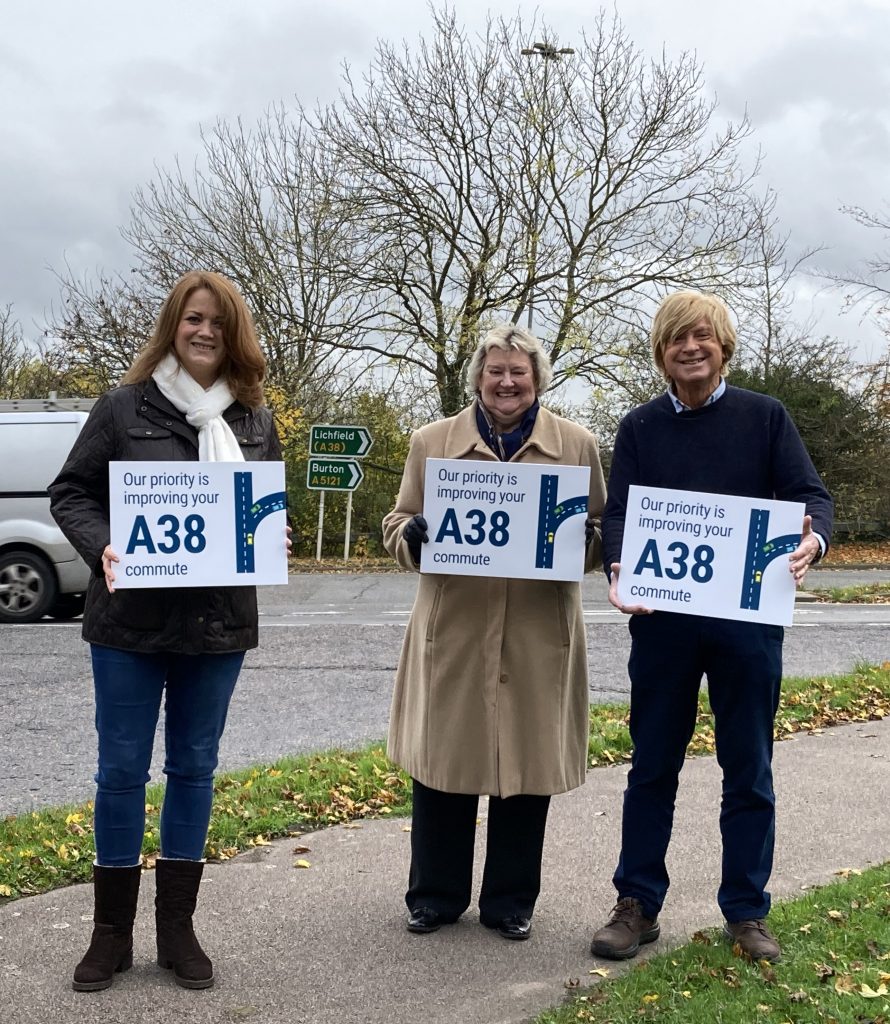 The MPs met at the A38 Claymills Junction in Burton, which last month received funding from Midlands Connect—the region’s Sub-national Transport Body—to part-fund the production of a business case to examine possible improvements between the junction and the Branston junction of the A38.

Staffordshire County Council was awarded funding in the region of £50,000 to put together a business case designed to secure Government funding for the much-needed improvements—something the MPs will be pushing for as part of their campaign.