The problem with HS2 isn’t the principle, but the practice

There are so many arguments which have been presented against HS2:  Its cost, its damage to the environment, its inability to connect effectively to the rest of the transport network, and whether – in the light of Covid and changing work patterns – it is needed at all.

And HS2 and its supporters have changed their arguments over the course of the years to defend the project.

First, it was the glory of shaving 10 minutes or so off the journey time between London and Birmingham.  Then it became the far more credible: it will relieve the congestion on existing railway lines such as the West Coast Main Line.  Now, proponents of HS2 seem to have even dropped that argument and say instead that it will create jobs.  For the amount of jobs it will create, the £100 billion-plus price tag seems a trifle high.

But I am not against HS2 in principle.  It’s the practice that concerns me.

When HS2 was originally proposed, the line would have followed an existing transport corridor, the M40 and existing rail routes, which would have minimised the huge environmental damage and reduced the amount of tunnelling required so minimising costs.

By contrast the route, adopted by Labour’s Lord Adonis when Transport Secretary, cuts swathes through pristine countryside and requires extensive tunnelling costing tens of billions through the Chilterns and other areas. And the experience of Crossrail should be evidence, if any were needed, that this is likely to be neither in time nor in budget.

The justification for this was that if you are going to build a high speed railway, you might as well do it so trains can run even faster than those on the continent.  And this needs the railway to run in straight lines.

But it now isn’t going to run in straight lines.

The hybrid bill procedure, which had to be adopted to see HS2 legislation through Parliament, saw the committee take evidence from the numerous individuals and organisations directly affected by HS2.  The route was then changed locally to mitigate the damage resulting in those straight lines becoming more serpentine. Those ultra high speeds will now not be reached.

So the argument which rejected the original design has become redundant. But by then, it was felt it was too late to go back to the drawing board.  Oh, for the benefit of hindsight!

But my main objection to HS2 is its lack of connectivity.

The original plan would have connected the rail line to HS1 and the Channel Tunnel, Heathrow Airport, and the main rail interchange at Birmingham New Street station.  HS2 does none of this.

So the original concept of passengers joining the train at Manchester city centre arriving swiftly at the Gare du Nord in the heart of Paris – quicker than taking any flight – is not now the case. Far from dissuading travellers from using polluting air travel, changes of station at London (the train arrives at Euston where there is insufficient public transport followed by a trek to St Pancras with all your luggage to catch the Eurostar) will dissuade most from taking the train. 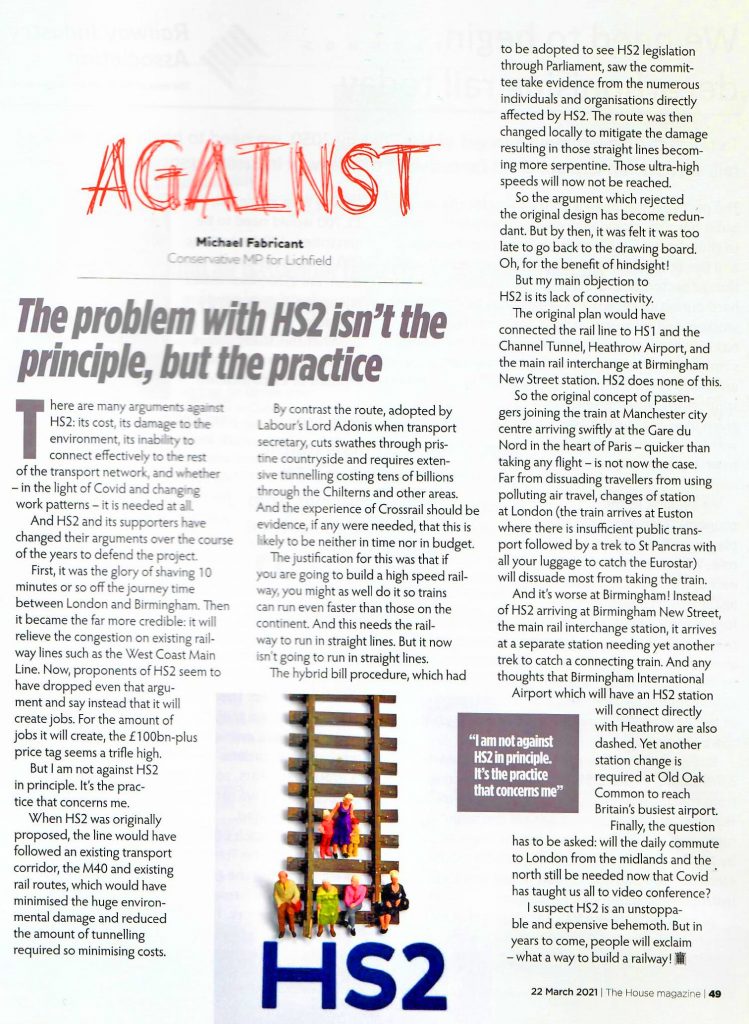 And it’s worse at Birmingham!  Instead of HS2 arriving at Birmingham New Street, the main rail interchange station, it arrives at a separate station needing yet another trek to catch a connecting train.  And any thoughts that Birmingham International Airport which will have an HS2 station will connect directly with Heathrow are also dashed. Yet another station change is required at Old Oak Common to reach Britain’s busiest airport.

Finally, the question has to be asked:  will the daily commute to London from the midlands and the north still be needed now that Covid has taught us all to video conference?

I suspect HS2 is an unstoppable and expensive behemoth.  But in years to come, people will exclaim – what a way to build a railway!