Despite the Coronavirus emergency, HS2 Ltd has confirmed to the Woodland Trust that it will begin destroying the Fulfen Wood near Lichfield, an ancient woodland, from April.

Michael Fabricant says “This wanton act of desecration will destroy at least an acre of ancient woodland which contains both common and soprano pipistrelles bats and occasional Myotis species.  Bat roosts within this wood will be lost to the scheme. I agree with the Woodland Trust who say that HS2’s attempts to move the soil from five ancient woodlands during April is a ‘futile act’. The move goes against both conservation principles and guidance from Natural England.  Ancient Woodland is at least 400 years old and which has remained undisturbed during that period.”

Five ancient woodland sites will be desecrated by HS2 with the other four being in Warwickshire:  Broadwells Wood, Birches Wood, Crackley Wood, and Ashow Road. The work will take around eight weeks.

“HS2 Ltd has admitted it is acting against industry standards by doing the work now, when ancient woodland is bursting into life. We are shocked at their approach.  Protection of the environment continues to play second fiddle to costs and timetables.

”Translocation is defined as the physical removal of a habitat from one location to another in an attempt to offset the impact of development on the ecological interest of a site. Unfortunately, it is increasingly being suggested as a form of environmental compensation for proposed developments. However, translocation is not feasible for ancient woodland because ancient woodland is defined as an irreplaceable habitat. Natural England guidance clearly states that an “ancient woodland ecosystem cannot be moved”. It is therefore not an appropriate alternative to conservation in situ. 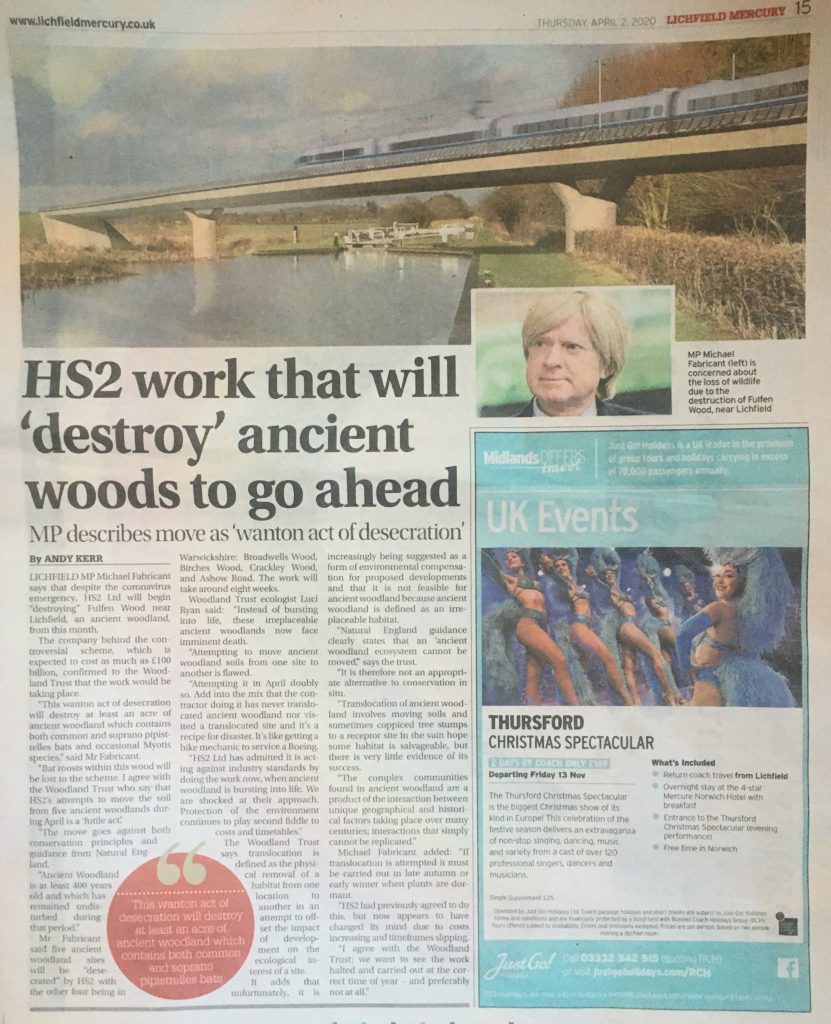 Translocation of ancient woodland involves moving soils and sometimes coppiced tree stumps to a receptor site in the vain hope some habitat is salvageable, but there is very little evidence of its success. The complex communities found in ancient woodland are a product of the interaction between unique geographical and historical factors taking place over many centuries; interactions that simply cannot be replicated.

Michael Fabricant adds  “If translocation is attempted it must be carried out in late autumn or early winter when plants are dormant.   HS2 had previously agreed to do this, but now appears to have changed its mind due to costs increasing and timeframes slipping. I agree with the Woodland Trust; we want to see the work halted and carried out at the correct time of year – and preferably not at all.”