Say what you like about Brexit, but at least it’s made Britain interesting again

Members of Parliament are tearing their hair out at the thought of the Withdrawal Agreement coming back to the House of Commons for a fourth time while the electorate in their utter frustration look set to vote for the Brexit Party in their millions in the European Elections.  Leavers and Remainers are united on one thing: after three years, we’re all pretty bored with Brexit.

But it’s not all bad.

Brexit has strangely been the greatest advert for the UK since Cool Britannia featuring nightly on tv screens around the world.

If you’ve been abroad in the past couple of years and spoken to the locals, chances are you will have been faced with a question like “so what’s happening with Brexit?”

While on a recent trip to the States, this was precisely what I experienced. Abroad, it has become the small talk introducer rather like we Brits comment about the weather.

There can be no denying that our decision to leave the EU, and subsequent mismanaged attempts at carrying that out, has sparked an interest in British politics not seen in generations.

Some hardcore Remainers, such as the BBC presenter Gavin Esler, insist that our politics is a “worldwide joke”. I do not agree.  It may be a joke here, but for many people overseas, the overriding emotion has been one of morbid fascination.

Many foreigners across the planet have had very little if any awareness of the intricacies of British and European politics prior to 2016.  “What is the EU?” “What does Brexit mean?” “Why is the UK leaving the EU?” are all questions the world has been asking since the EU Referendum in June 2016..

Has this intrigue sometimes been mixed in with derision? At times. On more than one occasion, the popular American comedy show ‘Saturday Night Live’ has mocked Theresa May’s repeated failed attempts to get her Brexit deal through Parliament.

But while the global reporting of Brexit has not been universally positive, it’s still coverage that we would have not otherwise received.

In the US particularly, it has been rare in the past to see British politics covered with the same kind of intense detail and passion that their politics is covered over here. But that is precisely what is now happening. And the associated coverage relating to Brexit is more often than not extremely positive.

The world is like a marketplace, and the British brand is being seen. Through Brexit, people from across the globe are being inadvertently exposed to British culture.

On the CBS Evening News and Fox News in the US, viewers are seeing the iconic green benches of the House of Commons chamber and the majestic façade of the Palace of Westminster. And more.

They are hearing the names of great British leaders like Oliver Cromwell, Queen Victoria and Winston Churchill while at the same time, learning about one of the oldest democracies in the world.

Trafalgar Square, Buckingham Palace and the London Eye are all backdrops and a part of the vibrant jigsaw which get coverage while reports on Brexit are transmitted abroad. 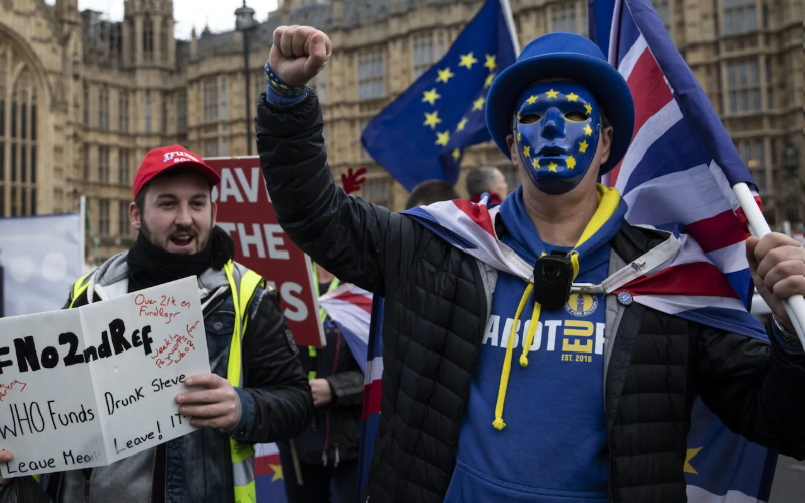 And although the often loud Brexit protesters around College Green may be irritating to MPs, they and their flags, eccentric top hats, bright clothing and megaphones all add rich colour. They are in marked contrast with protesters in France and other parts of continental Europe and this has been commented on by a number of overseas correspondents.  Unlike the Gilets Jaunes protesters in France, they are not hurling petrol bombs nor being tear gassed by the police.

This is publicity that money can’t buy – and it appears to be working too. An analysis of the Wikipedia page for ‘the United Kingdom’ reveals that in months with particularly big Brexit stories, such as in June 2016, March 2017, July 2018 and January/February 2019, hits on the UK’s page increased dramatically.

Figures from Visit Britain show that in 2017, the UK received an extra 1.6 million visitors compared to the previous year. Brexit has heightened interest in the UK.

Of course, the sooner we sort out Brexit, the better. The fact that we didn’t leave on 29th March will cast a shameful shadow over British politics for decades to come.

That said, the Brexit deadlock has at least garnered worldwide interest in our country’s politics, which in turn has led to a greater enthusiasm for the UK in general.

As the old saying goes, there’s no such thing as bad publicity.