STATEMENT ON LEAVING THE GOVERNMENT AND FUTURE PLANS

Michael Fabricant has resigned from the Government and says: “Around six months ago, I told the Government Chief Whip that I didn’t wish to remain in the Whips’ Office and the Government for too much longer as I needed greater freedom to speak publicly on local matters. More recently, I told the Prime Minister it was now time for me to leave. I explained that I have missed speaking in the House of Commons. As a Government Minister, I have been constrained and unable to raise certain issues publicly. It’s been hugely frustrating for me.

“I support the Coalition’s legislative programme, but I also want to promote policies that interest me including introducing a federal system to the Governance of the UK in order to keep Britain united – particularly in the light of a referendum on independence for Scotland, advancing digital communications in the UK using better high speed wireless connectivity, and re-assessing our costly relationships with the European Union and reasserting our economic relationship with the United States.

“But most importantly of all, I want to be able to raise issues in the House of Commons Chamber that directly affect the daily lives of my constituents. While I have been able to do this behind the scenes in discussions and in correspondence with ministers, I have regretted the opportunity not to be able to air these issues in public. I will now be free to do so again.

“One such issue is HS2. I strongly believe that the route of the high speed line is completely wrong. In my view, the route should not carve its way through unspoiled countryside. It will cause environmental damage not only to southern Staffordshire, but also to other sensitive areas like the Chilterns. With a rethink on the third runway at Heathrow, it is now even more important that the route be re-assessed. I personally favour the route the Conservatives supported back in Opposition using existing transport corridors; namely, the M40 and M6 route which would minimise the environmental impact and would avoid Lichfield District which has had more than its fair share of infrastructure projects over the years. It is strange that we have adopted the Labour Government’s planned route which, it would seem, was designed to damage as much countryside as possible. I will do all that I can to ensure that the route is changed back to the original route when it is considered by the House of Commons Bill Committee when it sits in 2013 and beyond.

“I have served in the Whips’ Office for 7 years both in Government and in Opposition and as a shadow Trade minister before that. I have definitely got the ‘Seven-Year Itch’.”

Among other things, in his handwritten note to the Prime Minister, Michael Fabricant wrote: ‘As you may know, I have served in the Whips’ Office – in Government and in Opposition – for over 7 years. In Government, it has prevented me from speaking in the Chamber – a forum I have much enjoyed since 1992. With this in mind, I hope you will understand that I no longer wish to serve in that capacity. Nevertheless, I continue to support our legislative programme and you personally……….’

In his reply, the Prime Minister wrote:

‘Thank you so much for your recent letter, regarding your role in the Government Whips’ Office. Although your standing down from your current position will clearly be a loss to the Whips’ Office – and to my Front Bench – I can quite understand your reasons for making this decision; one I completely respect.

‘You have been such a loyal, dedicated and committed colleague over the past two and a half years in Government and, before that, for five years in Opposition. It has been a joy to work with you and you have brought so much to our team. It says so much about your character and work ethic that you have given me prior notice of your intentions, and that you have made this decision to help other newer colleagues make the transition to the Front Bench.

‘In particular, I would like to take this opportunity to thank you for the leadership and help you have given in terms of campaigning over the past years, not least in the by-elections that have taken place. Your enthusiasm and passion to assist our Conservative candidates in these campaigns has been a tremendous help and something we will certainly want to draw on again in the future.

‘I know that you will continue to stand up for your constituents and our Party, and that we can be assured of your loyalty and support.

‘Thank you very much for your kind and thoughtful letter.

‘You have been a real star and I appreciate all your help and support. 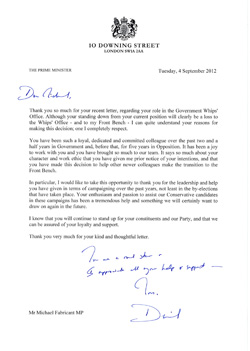