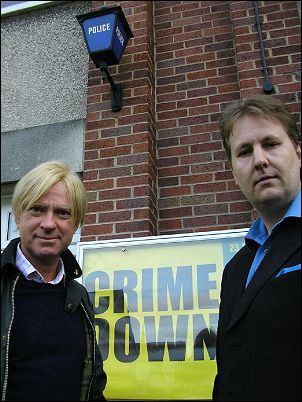 At last week’s meeting of Staffordshire County Council, Conservatives called
for restraint in the Governments plans to scrap the County’s police force,
in favour of a regional super force.

"Conservatives at the County Council are not entirely against change to the
police service in Staffordshire. We are, however, extremely concerned that
the Staffordshire force could be swallowed up by West Midlands Police.
Birmingham and the Black Country do not, in our opinion, sit well with the
needs of a rural area like Staffordshire. If a merger between neighbouring
rural forces would offer improved policing, it is worth looking at. A merger
with West Midlands will risk Staffordshire’s position as a top performing
force. That would be unacceptable".

Plans to combine all or some of the forces that currently cover
Warwickshire, Staffordshire, West Mercia and West Midlands will be
considered by the Government early next year.

The Labour led Staffordshire Police Authority recently submitted
recommendations to the Home Secretary in favour of a regionalised police
force. In his report to the County Council, the Chairman, Mike Poulter,
endorsed the idea of merging the current forces into one and criticised
Conservative members of the Authority for opposing the plans.

Lichfield and Burntwood MP, Michael Fabricant also has major concerns. He
says, "I have no objection with the principle of a police merger. I do
have an objection if it will reduce standards of policing in Staffordshire.
I am not convinced that the regionalisation of our police force, based and
commanded from a major urban conurbation like Birmingham, will benefit a
rural county with small cities and market towns like Staffordshire.
"A merger, if a merger be necessary, with a Force like the West Mercia
constabulary seems far more logical. Whatever assurances have been given
now, I fear that what little policing we have left in Staffordshire will be
reduced still further because of the major demands of cities like Birmingham
and Wolverhampton. And for that reason, both Labour and Conservative MPs
have already expressed their alarm in Parliament at the Staffordshire
Ambulance Service being absorbed by the less efficient West Midlands service
based in Birmingham.
"With regards to the Police merger, I am seeking urgent meetings with Home
Office ministers."
County Conservatives have this week also launched a petition to gauge the
views of Staffordshire people. Between now, and when the Government’s
decision is due, they hope to gather tens of thousands of names reinforcing
the fact that there must be no reduction in the quality of policing in
Staffordshire and also rejecting any idea of a merger with the West Midlands
Constabulary.

Matthew Ellis concluded, "Our county-wide petition is collecting thousands
of signatures. We want to ensure our policing remains close to the people.
Staffordshire currently has some of the best and we are determined to keep
it that way. The Government must not be allowed to ride roughshod over
local opinion."

The campaign has also launched a website, "http://no-staffsmerger.co.uk"
where more information on the policing plans, and an online petition, can be
found.